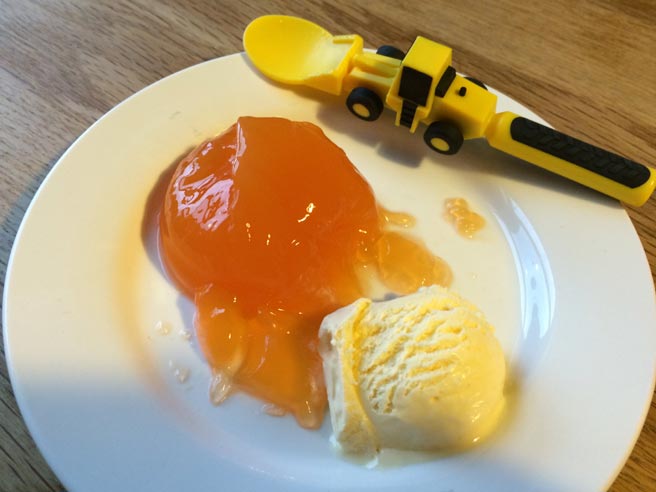 The toddler’s been badgering me to make him some jelly for weeks, and seeing as this is a blog about me making things, I thought it would be a bit of a cheat to buy a packet mix, so decided to make it from scratch – kind of.

The husband’s a fish-eating vegetarian, otherwise known as a pescatarian, so proper gelatine was out of the question. Instead I bought myself some of Dr Oetker’s vege-gel.

Having done a bit of inter-web research about vegetarian jelly I kind of free-styled. My jelly making involved mixing a carton of mango and cranberry juice with a sachet of vege-gel until the granules had dissolved, heating the mixture to just before boiling, cooling it for a bit, then pouring it into pots and popping the pots into the fridge for an hour or so.

I’m not sure what went wrong, or whether vege-gel doesn’t set as firm as the real thing, or whether there was too much juice to vege-gel ratio, but it certainly wasn’t the firmest of jellies.

The result, despite leaving the jelly for a lot longer than suggested, was a tasty splat of wobble that the toddler devoured in seconds.

The verdict from the toddler: ‘Mummy, this is yummy. Thank you. You’re my best friend.’ Result.

One thought on “Vegetarian mango and cranberry jelly”