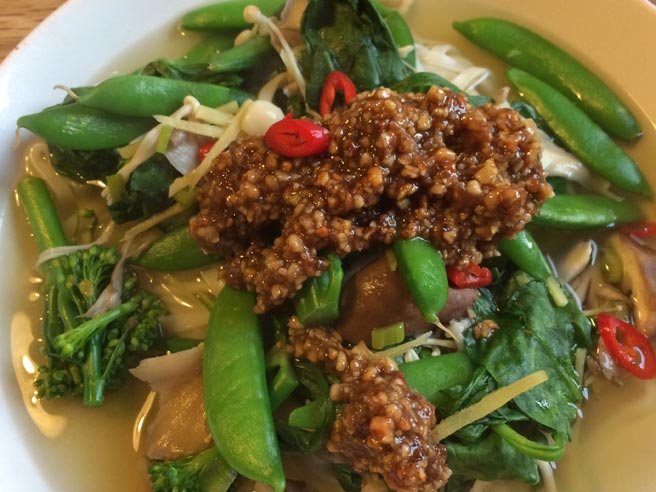 I love noodle broths but I don’t make them that often as I find them a bit messy to eat. I usually end up wearing half the broth down the front of my top (more often than not on a day that I’ve decided to wear one of my few white tops!).

Anyway, feeling the need for a bowl of restorative noodle broth (they boy has just started school and I’m feeling a little bit sad that he’s growing up so quickly), I decided to give Anna Jones’ walnut miso with udon noodles a whirl as it sounded exactly what was need to stop me feeling sorry for myself.

As there was no picture to accompany the recipe I followed it to the letter hoping that I wouldn’t be disappointed with the result.

The walnut miso paste is quick and easy to make; simply toast the walnuts (which I am ever so slightly allergic to – they give me a bit of a scratchy mouth but as I love coffee and walnut cake, brownies and was about to make walnut miso paste I decided to ignore my walnut allergy and hoped that the dish made up for it), then blitz them into breadcrumb like pieces and mix with the remaining ingredients.

As for the broth it’s a simple mix of vegetable stock, spring onions mushroom, ginger and spring greens. Being without spring greens and following Anna’s suggestion that most veg work well in this broth, I opted for spinach, sugar snap peas and tenderstem broccoli. And, as I’m a bit of a chilli fiend I added some finely sliced red chilli.

Once the noodles are cooked you divide them into two bowls, pour over the broth and veggies and top with a generous dollop of miso paste. While the finished dish looked rather lovely and the walnut miso paste looks delicious balanced on top of the noodles and broth, once you stirred it into the broth it doesn’t look so wonderful.

I don’t think I would be far wrong by comparing it to something you may find in a dirty ditch somewhere. However, looks can be deceiving and while it didn’t look all that once I’d had a quick stir, it tasted wonderful.

The verdict from the cook: ‘While it did give me a bit of an itchy scratchy mouth and I splashed it down my new white top (when will I learn), this broth was a tasty (if a little muddy looking) hug in a bowl. Just what I needed.’

The verdict from the husband: ‘I’d have that again..’ whilst wiping a bit of miso paste from his beard. Nice!

One thought on “Walnut miso broth with udon noodles”