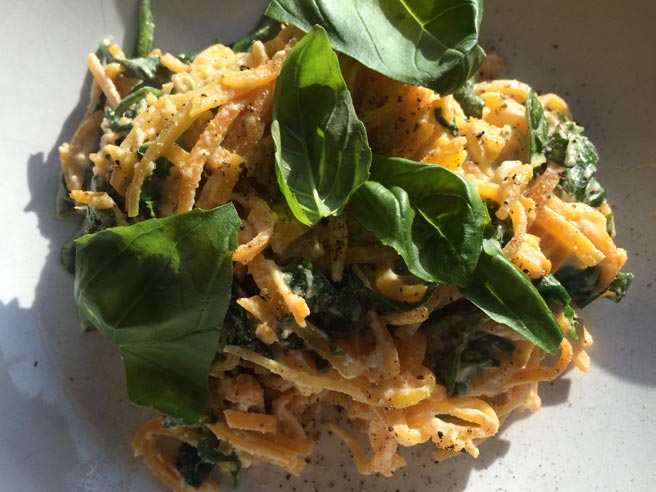 I’ve mentioned before that I’m a bit of a late adopter to the spiralizing party – mainly due to the fact that the spiralizer I bought appears to chew up veg and spit it out in an unappetising heap, rather than beautifully curled noodles. Since then the spiralizer has been packed away in the cupboard and I’ve shied away from vegetable noodles until now.

So, what’s made me have this change of heart? Pre-prepared vegetable noodles for sale in my local supermarket, that’s what. I don’t usually go for pre-prepared veg. Chopping and preparing ingredients is one of my cooking highlights. One of my fave dishes to cook is this rainbow pad Thai, because it involves a lot of chopping. But I digress.

I bought a pack of pre-prepared butternut squash noodles, and set about finding a suitable recipe to use them for, plumping for this rather tasty looking creamy spinach sweet potato noodles with cashew sauce from those creative cooks at  pinch of yum. It looked simply delicious and can be knocked together in no time – my kind of recipe.

The husband is mildly dairy intolerant making a traditional creamy sauce off the menu, so I was intrigued to see whether a creamy sauce made from garlic, water and cashews would make a tasty alternative. My trusty nutri-bullet made short work of blending the ingredients into a double-cream consistency.

With a limited veg noodle choice at the supermarket, I used butternut squash ‘boodles’ (the supermarket’s name for them, not mine), but followed the rest of the recipe to a tee, and dinner was ready in less than 30 mins.

The verdict from the husband: ‘Cashews, I’d never have guessed, but now you mention it…mmm, I’d have this again.’

The verdict from the cook: ‘The cashew cream is a revelation. Maybe one to try on the vegan-soon-to-be-brother-in-law?’