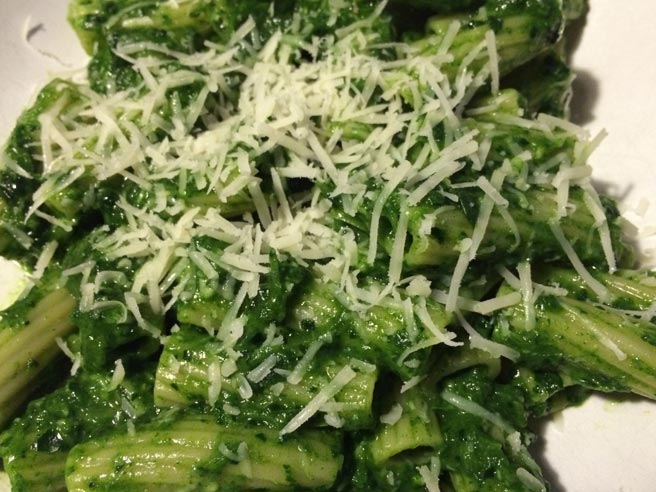 I accidentally bought some cavolo nero recently. When I say accidentally, I don’t mean I didn’t realise that I’d put some in my shopping basket. What actually happened was, I forgot my shopping list – again – and thought I needed cavolo nero. I didn’t and so the beautiful curly leaves were left languishing in the fridge until I decided to do something with it.

That something, happened to be what Jamie Oliver describes as the ‘World’s most elegant winter pasta. While I probably wouldn’t go as far as to say it’s the World’s most elegant pasta, it’s pretty tasty and a little bit luxurious with it’s silky smooth cavolo nero sauce, kind of like pesto but richer. And, an added bonus is that it takes next to no time to pull together and uses very few ingredients.

The recipe simply involves boiling peeled garlic cloves, a leek and the cavolo nero, draining the veg and whizzing it up in a liquidiser until silky smooth, before seasoning, mixing with the cooked pasta and adding parmesan (although to be quite honest, if you want to make the dish vegan the sauce is pretty tasty without the cheese).

The verdict from the husband: ‘Oooh, that’s green. Very green.’ Followed by, ‘Mmm, that’s nice. Not my favourite, but nice.’

The verdict from the cook: ‘If I accidentally buy cavolo nero again then the ‘World’s most elegant winter pasta’ will definitely be on the menu. ‘