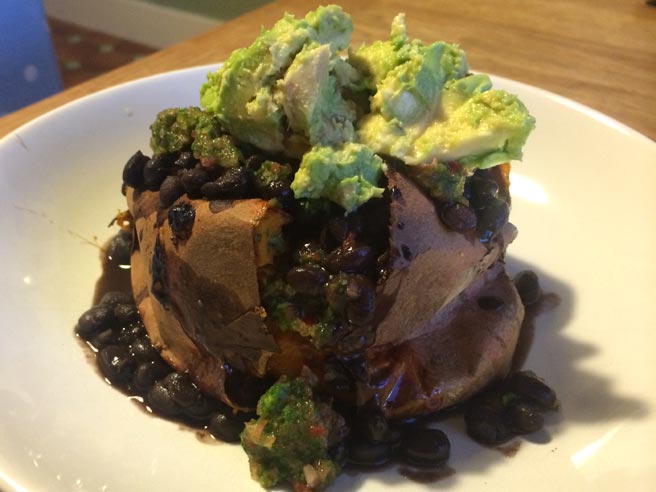 Having a jacket potato for your supper, may not sound like the most tasty thing in the world, but with a little bit of inspiration from the very clever Anna Jones, a humble sweet potato was turned into something very special indeed.

What I love about Anna’s recipes is that she makes cooking reasonably accessible to everyone. Very few ingredients are out of  the ordinary, and it doesn’t take too much time or effort to put them together.

Wanting something quick and easy for dinner, I decided to give her jacket potato toppings a go. As the husband and I love the flavours of Mexican cooking, the black beans with avocado and chilli sauce caught my eye.

While the sweet potato was cooking, I added a chopped clove of garlic, chilli and a pinch of cinnamon to a tin of black beans and heated the whole lot up over a low flame. Then, blitzed a couple of tomatoes with a bunch of coriander and a red chilli to make the chilli sauce, and mashed an avocado with a squeeze of lime juice.

Once the potatoes were ready, they were topped with the beans, chilli sauce and avocado. Nothing spectacular, just a simple tasty supper.

The verdict from the husband: Pretty much the same as I’ve written above… ‘Mmm, that was nice,’

Recipe taken from Anna Jones, A Modern Way To Cook.