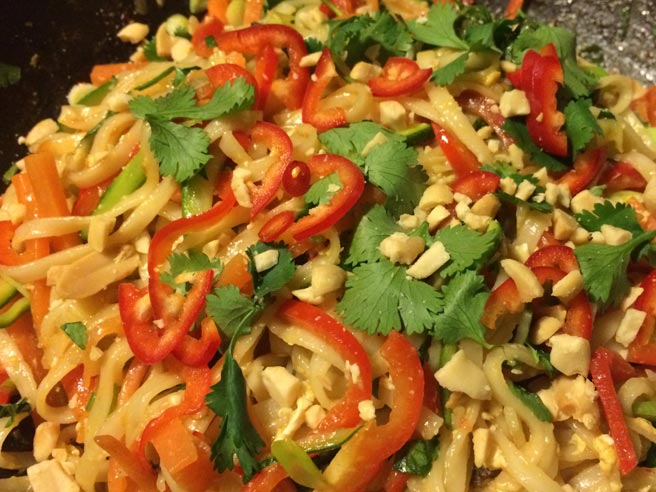 A while ago I came across a wonderful site called A Pinch of Yum. It’s packed full of wonderful recipes for vegetarians and carnivores. The pictures are amazing, the ingredients are never anything too out of the ordinary and I’m yet to come across a recipe that doesn’t live up to expectations.

So, in a bid to wean myself off Anna Jones recipes, I turned to A Pinch of Yum for inspiration. This rather colourful and aptly named Rainbow Vegetarian Pad Thai, caught my attention, and I wasn’t disappointed. It’s very nearly vegetarian, with the exception of the fish sauce, but as the husband eats fish, I have no qualms including it to my cooking. If, unlike the fish eating vegetarian husband, you actually are vegetarian, there are vegetarian and vegan friendly alternatives, like this vegan ‘fish sauce’ made with seaweed.

The recipe suggests that you spiralize your veg. I was late the courgetti party and being unsure as to how much spiralizing I’d actually do, I invested in a cheap hand held spiralizer some time ago. I tried to use it, but ended up with a pile of veg that looked like the boy had chewed the veg, then spat it back out again in disgust. Not wanting a repeat performance, I decided to finely slice the veg and was more than happy with the results.

I pretty much followed the recipe verbatim, with a few minor tweaks. I substituted the white onion in the main ingredients for spring onions, and liking spicy food, I finely sliced a red chilli and used it to garnish the pad Thai. This meant that the husband and I had the occasional very spicy hit while tucking into our supper – which we both rather enjoyed.

Would I make it again? It’s fresh, tasty, and including chopping the veg, the whole dish can be made in about 30 minutes.  So, yes, this rainbow pad Thai will definitely be making another appearance at the gas mark five dinner table soon.

The verdict from the husband: A resounding ‘mmmmmm’ as he dived in for another fork of delicious noodles.