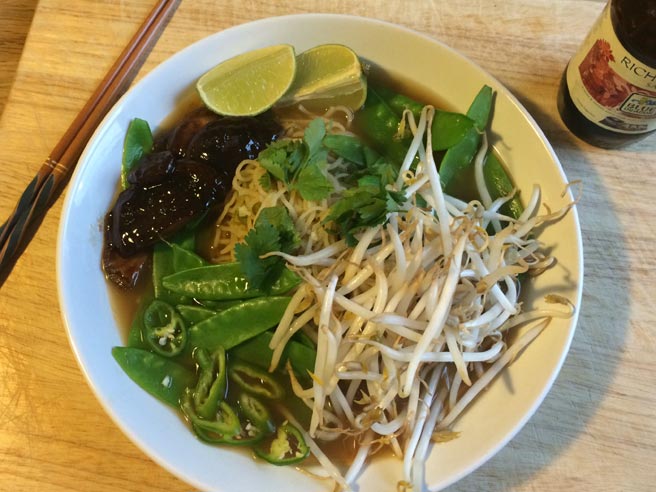 I happened across this 30 minute vegetarian pho recipe from ohmyveggies.com during one of my endless trawls through the internet for new recipe ideas. I’ve never had a pho before, firstly, because I’ve never been to Vietnam or a Vietnamese restaurant, and secondly, because by all accounts it takes hours and hours to make the meaty stock needed for an authentic one.

Essentially, it’s a meaty noodle broth, but as the husband is a fish-eating vegetarian and I’m pretty time poor at the moment, making a traditional version was out of the question. However, the lure of a 30-minute bowl of noodle goodness was too much to ignore.

The ingredients for the pho are pretty standard for a South East Asian broth – stock, spring onions, ginger and coriander, while shiitake mushrooms sautéed in butter, sesame oil and hoisin sauce makes a delicious alternative to meat.

Worried that the broth was lacking something and might be a little bland, I decided to free-style a little by adding a dash of fish sauce and big splash of soy sauce. And, as I had a stash of mange tout hanging around in the fridge, it felt rude not to throw them into the mix as well.

I cooked the noodles in the broth to save on washing up, then divided the broth between two dishes, garnished with chilli, coriander and a generous handful of bean sprouts, plopped on the mushrooms and a wedge or two of lime, and Bob’s your uncle.

The verdict from the husband: ‘Mmmmmmmmmmmm. Yuuuuuummmm.’ I  think he liked it, and so did I.

NB: I’ve tagged this as vegetarian. While the recipe is vegetarian, my adding fish sauce to my stock, obviously isn’t…