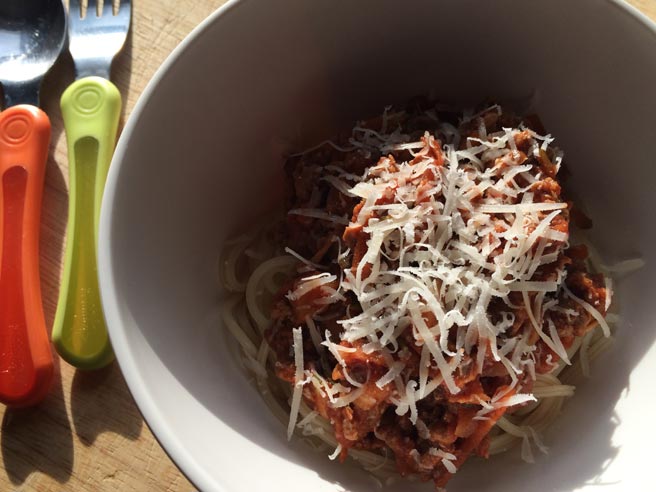 I always used to say that when I had a child, he or she, would eat the same as the husband and I. Fast-forward two-and-a-bit years and having tired of throwing away food that has barely been looked at let alone tasted, I spend my evenings making not one, but two meals. One for us and one for the toddler. Except, that is, when it comes to a good old spaghetti Bolognese.

The husband is a pescatarian, so it’s a vegetarian version for us. I’m not a huge fan of Quorn – why eat a ‘meat’ substitute when there are plenty of grains and pulses that can pull off the same effect? However, when it comes to Bolognese for the toddler, I succumb to the mighty Quorn.

I don’t follow anyone’s recipe, this one is all mine! To ensure the vegetable dodging toddler gets somewhere close to his five-a-day I throw as much veg as possible at the pan; chopping and frying a red onion with a clove of garlic, a grated carrot, a grated courgette and a handful of finely chopped mushrooms. Next comes the Quorn, and when that has started to colour I throw in a carton of passata (mainly to avoid the toddler throwing lumps of rejected chopped tomato on the floor) and a sprinkle of oregano. This simmers for a bit until the sauce has reduced and the veg has softened. And that’s it. Simple.

The verdict from the toddler: ‘Daddy, can you show me how to suck the noodles, please.’ Spaghetti was sucked and Bolognese was consumed. Job done!