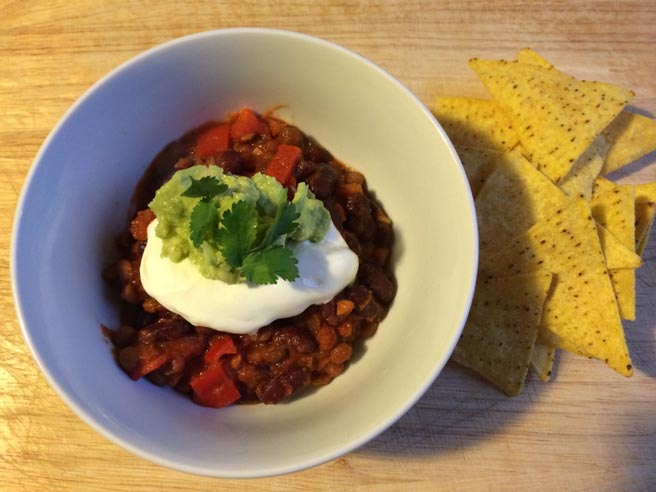 This quick and easy recipe is a regular at our table, probably because it’s super tasty and takes little more than 30 minutes to get the table. It’s from Rose Elliot’s Low GI Vegetarian Cookbook. While it might be considered a diet book for vegetarians, what the recipes lack in calories, it more than make up for in flavour.

Best-ever chilli is Rose’s name for this dish not mine, but as yet I’m still hunting for a veggie chilli dish that surpasses it.

There’s nothing out of the ordinary in the list of ingredients; onion, garlic, red chilli, red pepper and a tin each of green lentils, kidney beans and tomatoes, plus a teaspoon of coriander. Once you’ve fried the raw ingredients in a drop of olive oil until softened, everything else is thrown in and left to simmer for 10 minutes. Easy peasy.

Rose suggests serving it with baked potatoes, but I like to dish it up with a bowl of tortilla chips, guacamole and sour-cream – I’m not sure how low GI the meal ends up after those additions, but it’s a crowd-pleaser – generally.

Verdict from the husband: He finished his bowl and scraped the pan clean. Sometimes actions speak louder than words.

One thought on “Best-ever chilli?”