While Yotam Ottolenghi is predominantly known for his Mediterranean and Middle Eastern flavours, he also does some pretty good Asian dishes too. One of our favourites is a vegetarian Malay dish (again from Plenty) called mee goreng.

It’s a noodle dish, flavoured with coriander, cumin and a chilli paste called sambal oelek. A couple of years ago the husband and I would buy up jars of the stuff whenever we saw them, but it seems to be more widely available now.

As for the dish, Yotam claims it only takes a few minutes to cook, once you’ve got a bit of prep out of the way. We’re obviously not as pro as Mr Ottolenghi, but I reckon you can get the dish to the table in around 30 minutes. The most fiddly bit is trying to make sure the tofu doesn’t crumble to nothing in the pan. To avoid this we’ve adapted the recipe and fry it in a separate pan. (If you’re wondering why I’m saying ‘we’ve’, it’s because this is a favourite recipe of the husband and he’s probably cooked it more times than me).

Another thing we’ve decided to change is the addition of crisp-fried shallots and shredded iceberg lettuce. We rarely buy iceberg lettuces, so it seems silly to buy one for just a handful of shredded leaves, and we can’t usually be bothered to crisp up some shallots. Personally, I don’t think the dish suffers for these omissions, but you may disagree. 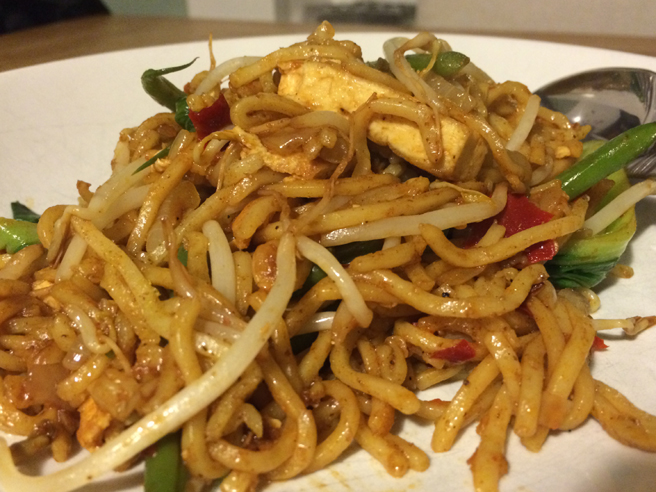 The verdict from the husband: ‘Mmmm, I’d forgotten how much I love this dinner.’